Being West is Best: A Book Review 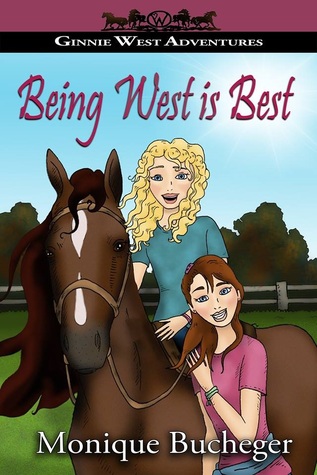 Today I'm pleased to review Being West is Best: A Ginnie West Adventure (Book 3) by Monique Bucheger. Here's the summary from the back cover:

Twelve-year-old BFFs, Ginnie West and Tillie Taylor, are matchmaking geniuses. Together, they maneuvered Ginnie’s widower-dad into proposing to Tillie’s divorcee-mom. Sweet! Certain they are well on their way to sisterhood, each girl is floored when Tillie’s lousy-excuse-for-a-father puts in an appearance after a six year absence. Too bad “lousy dad repellant” doesn’t come in a can. Even though Tillie’s dad has sobered up and is determined to make amends, Tillie would rather he just disappear again. If he stays, “Operation: Secret Sisters” may need to be renamed “Operation: Not Gonna Happen.”

If that’s not bad enough, the biggest bully in seventh grade comes over often and wishes he could call the West’s farmhouse “home.” When the bully’s abusive dad shows up as well, Ginnie thinks it’s time to change her family’s motto from “When you’re here, you’re family” to “There’s no more room at the West’s.”


My review: As you can tell, this book is written for pre-teen girls, and it is exactly the type of book I enjoyed at that stage of my life. There's a lot of drama from a previous divorce, an impending remarriage, and school bullying. The characters are face with some grown-up problems, and they have to learn to deal with them in grown-up ways. I was a fan of Judy Blume as a kid, and this book reminds me of her writing. As an adult, I'm not such a big fan of Judy Blume's books because I noticed my kids showed more disrespect after reading them. That's why I like Monique's books so much. They reinforce traditional values like respect for parents, honesty, and forgiveness. Plus, the farm setting is really fun.
Email Post