My son and I had such a fun time reading The Kindling that I jumped at the chance to review the sequel, Penumbras. Both books are about a group of middle school friends who discover they have magical abilities. I know it sounds like Harry Potter, but Braden Bell has built a completely new and original world to inspire the middle-school imagination. His magic centers around light and the battle against darkness. One thing I like about the books is that there are so many life lessons running under the surface. The characters learn about following their impulses to do good and overcoming feelings of insecurity.

While The Kindling is action-packed, Penumbras has a balance of action, romance, and character growth. One of my favorite characters, Dr. Timberi, is absent for the first half of the book. Though I missed him, this also keeps things interesting, as the middle schoolers have to face the powers of darkness on their own.

From the Back Cover:
Conner Dell didn't meant to blow up the school bus.
Or the bathrooms.
In fact, he only wanted to go to sleep and possibly dream about Melanie Stephens.
But explosions had a funny way of happening when Conner and his friends were around.
***
Conner Dell wants to be good--he really does. But he is terrified that he might be turning into a Darkhand, especially when new powers start to surface. What's worse, the Stalker is following Conner, but no one else seems to be able to see him. The Magi think he might be hallucinating, the guilt of what happened in the Shadowbox keeps weighing on him, and his relationship with Melanie Stephens is complicating things. Even for a Magi, Conner knows his life is anything but normal. 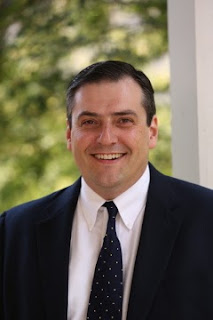 Braden Bell grew up in Farmington, Utah and graduated from Davis High School. He earned bachelor’s and
master’s degrees in theatre from Brigham Young University and a Ph.D. in educational theatre from New York University. He and his wife, Meredith live with their five children on a quiet, wooded lot outside of Nashville, Tennessee, where he teaches theatre and music at a private school. An experienced performer, Braden enjoys singing, acting, reading, gardening, and long walks with the dog.
Email Post
Labels: book reviews