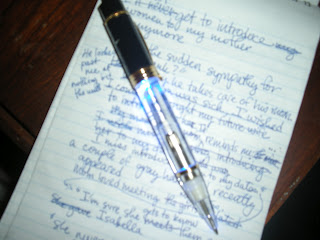 If you want boys to read something, tell them not to read it. That's what I did with a huge stack of National Rifle Association magazines the boys found after their grandfather passed away. You know what happened--they read each magazine in the stack cover to cover.

I decided I'd try a different tactic next time we encountered anything gun related. So when we drove past the NRA museum on our trip to Virginia, I told the boys we were definitely going.

Believe it or not, the NRA museum was not crowded, and it was free. I was excited to see that the exhibits were arranged to teach American history. The boys were excited to see the light saber used in Star Wars.

After about a half-hour of walking around looking at guns, my younger boys got bored. That's when they escorted Grandma to the gift shop. "I hope you didn't buy them anything," I told my mom when they got back. My three boys whipped out the fancy pens Grandma got them and showed me how they light up.

Later on, when we were checking out the pens at home, I realized that those pens could solve one of my biggest problems--writing down ideas while I'm in bed. I get my best ideas while I'm trying to go to sleep. I keep a notebook beside me at night, but sometimes in the morning, I can't read what I wrote.

I snagged one of the pens and tried it out that night. It cast a blue glow over a page of my writing notebook, but it didn't light up enough to wake my husband. I've never been so grateful for the NRA.
Email Post
Labels: special pen for writing at night writing writing in the middle of the night