I've recently gotten to know a new author, A.L. Sowards, who wrote Espionage.  I'm interviewing her on my blog, and she's interviewing me on hers. Her real name is Amanda, not Al like I thought at first.  (Hey, she wrote a book about war, so Al would make sense wouldn't it?)

I read that you like to swim. What are your other hobbies?
Reading and writing are big. I also spend a lot of time entertaining toddlers with horsey rides, board books, and megablocks. 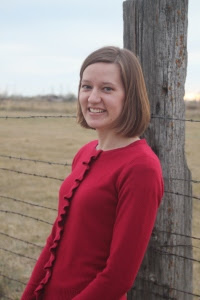 Espionage takes place in the 1940s at the time of World War II.  Where did you find inspiration for your details and settings?
The idea actually started in a high school history class. Our teacher told us about the D-day deception schemes the allies were using to throw the Germans off and I thought it was so cool (like something out of a Tom Clancy novel, only real). The rest of the story grew from there. Most of my research came from books, but some from the internet too.

How do you find time to write?
I honestly wish I had more time to write (I’m sure most authors say that). I try to write while my children are napping or in bed at night.

What books have you read lately that you liked?
I just finished The Bicycle Runner, by G. Franco Romagnoli. It’s not a completely clean read, but it was an interesting story and I loved his writing style. Unbroken, by Laura Hillenbrand, is another recent read, and it was amazing. Not long ago I picked up Night of the Fox, by Jack Higgins, and that was an enjoyable read. I used to read a lot of Jack Higgins, so it was fun to pick one of his books up again. I also really enjoyed some of the books that were Whitney finalists, especially: Rearview Mirror, by Stephanie Black, Bloodbourne, by Gregg Luke, Smokescreen, by Traci Hunter Abramson, and The Pharoah’s Daughter, by N.C. Campbell (I wasn’t able to read all the finalists, so I’m sure there are other fantastic books among the nominees). I’ve also read A Bridge Too Far, The Longest Day, and The Last Battle, all by Cornelius Ryan over the last two years. I highly recommend all of them if you like WWII military history.

What are your favorite movies?  World War II era movies?
I love The Hunt for Red October, Stardust, Robin Hood: Prince of Thieves, the original Star Wars trilogy. I do really enjoy WWII movies. Among my favorites dealing with that era are Where Eagles Dare, The Great Escape, and Saints and Soldiers (I’m excited for Saints and Soldiers: Airborne Creed to come out in August, especially since I hear it deals with the 1944 southern France campaign, which happens to be the same campaign one of the characters in my second book is involved in). I also have a small collection of edited WWII movies, and I think Saving Private Ryan and Enemy at the Gate are excellent (at least the versions I’ve seen).

What advice do you have for other writers?
Don’t give up! But don’t feel bad about putting a project on the back burner for a while. Sometimes a little space from the manuscript will make it easier to ruthlessly edit and improve it. And read books on writing, attend conferences, or join a critique group.

As the mother of twins, you’ve probably learned a few tricks to save your time and sanity.  Do you have any you want to share?
You know that primary song that says “Saturday is a special day, it’s the day we get ready for Sunday?” I never really got that song until I had 9am church and two new babies. We’d get clothes out the day before, pack two diaper bags, and pray really hard for a decent night’s sleep.
I had hubby do the grocery shopping for a long time after the twins came along, so I guess my trick is to make my husband do it! I do more shopping now, but I keep mostly to stores that have shopping carts with two places to strap kids in.
Other than that, sometimes you just have to take it one day at a time. Or one hour at a time.