I've been working on two projects lately--a novella set in Rexburg, Idaho, and a novel that begins in the Cape Verde islands. Over the last few months I've been rewriting both. I hate to rewrite, and I love to rewrite. Mostly, I hate it before I start, and I love it after I'm finished.

After I rewrote 150 pages, I took a break over Christmas and New Years. During that time, I watched a bunch of Kon Mari cleaning videos on Youtube and did a ton of decluttering. I also rearranged some of my drawers in the Kon Mari fashion. It struck me that decluttering is a lot like rewriting. It makes you feel a lot better once it's done. 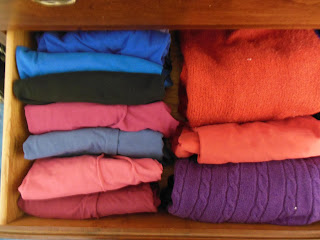 I think there's a myth among the general public that for a real author, words come easily. A real author can write a book in a month without much need to revise or edit. She naturally develops plots and outlines as she types, coming up with characters, worlds, and historically accurate details easily. For me, this couldn't be further from the truth.

Sometimes I forget this, and I get discouraged that I'm having to rewrite a scene for the third time. I was in one of these funks last month, when I read this quote by Michael Crichton: "Books aren't written--they're rewritten . . . It is one of the hardest things to accept, especially after the seventh rewrite hasn't quite done it." You read that correctly: Michael Crichton, author of Jurassic Park, The Andromeda Strain, Coma, Twister, Congo, and Westworld, has had to rewrite parts of his novels up to seven different times.

Then I found out that Ernest Hemingway rewrote A Farewell to Arms a whopping thirty-nine times!

I was already feeling much better about my third rewrite.

In a class I attended with Brandon Sanderson, he joked with us that his first drafts weren't absolutely spectacular and that his critique partner, after reading something that had been revised a few times, joked that he'd forgotten that Brandon was actually a good writer.

The process is different for each writer, but, no matter how you draft and revise, it involves serious work. Some writers may redraft instead of rewriting. Others may be like Diana Gabaldon,who wrote the Outlander series. She said, "I get asked, 'How many drafts do you go through?' all the time. The answer is either 'one' or 'infinity,' but I don't know how to tell the difference. I don't write, leave, come back later and revise.  I work slow and fiddle constantly, so the revision is pretty much done as part of the original writing.  By the time I'm done with a scene, I'm done with it."

This doesn't sound fun . . . but it is fun, once you start doing it, and finally everything starts to come together.