The Day I Became A Bad Mom 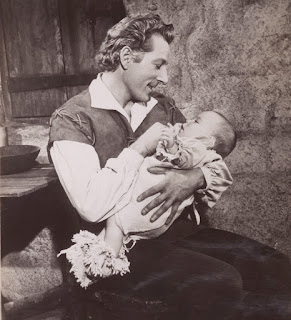 It really wasn’t my fault. It was Danny Kaye’s. How, you’re wondering, could some dead actor get me accused of child abuse? It all started with the movie, Court Jester. My husband had had enough of the kids watching the usual drivel on PBS. He wanted us to watch something with substance, something that would acquaint our children with a classic from the history of film. So we watched Court Jester.

My kids learned from the movie all right. They learned that if they wanted to be royalty, they had to have a special birthmark--a purple pimpernel—on their backsides. My daughter, who was three at the time, used a purple marker on her brother’s bum to make sure everyone would know he was a prince. I didn’t think much of it. So my son had purple scribbles on his behind? At least he was culturally enlightened. Over the course of a few baths, the marks disappeared.

The policeman showed up a few days later. Being almost six feet tall myself, I’m not easily intimidated. But this policeman was so large, peering through our front window, that I called my husband to answer the door while I retreated to the bathroom to change another diaper. My son, who was two at the time, had undiagnosed gluten intolerance. As parents, we were constantly trying to figure out what was causing the abnormal number of messy diapers. No sooner had I gotten to the bathroom than my husband told me the policeman wanted to talk to me.

Back at the front door, the officer explained that someone had reported me for child abuse because of the bruises on my son’s back. “Oh,” I said. “You mean the marker.” I told him the purple pimpernel story, and he said he’d need to look at my son to verify my account. The problem was that my husband was taking much longer to change the diaper than usual. I’m sure the officer must have wondered if we were stalling as I ran back and forth between him and the bathroom, checking to see if my son was ready to be put on display. Finally, my husband declared that my son needed a bath, and I, in exasperation, told the officer he could come look at our little boy standing naked and unbruised in the tub. “He’s definitely not abused,” the officer said—perhaps the most beautiful words I’ve ever heard in our bathroom.

I was relieved for only a few minutes. Then the questions came. Who reported me? Did I look like a child abuser? Did my son’s health problems make him look abused? What if it had been a real bruise? What if I were accused again? Would this be on my permanent record? Child abuse was a heinous crime. How could someone think I was a criminal?

Adding to my confusion was an experience I’d had the week earlier in a public restroom. As I’d stood at the sink, trying to cajole my potty-training daughter into washing her hands, an older woman remarked that if that were her daughter, she would give her a spanking for being so stubborn. On one side, someone thought I was too lenient. On the other, someone thought I was too harsh. It didn’t matter that I subscribed to Parents magazine, read bedtime stories, and cooked vegetables. I’d failed in my efforts to be a good mother. Why should I even try anymore?

For months afterward, I thought of myself as a bad mother. Now, looking back, I don’t see myself that way. I was a good mother caught in the trap of letting others dictate my self-image to me. In truth, the only people who knew what I did as a mother were my children and me. Everyone else had a false image. It was like they were trying to judge a book by a page, or, in the case of the restroom lady, by a sentence.

Eventually, I learned to see myself apart from the opinions of others. Some of the things that helped were:


Now that I've been a mom for seventeen years, I wish I could take all the younger moms out there and give them a little piece of my not caring. I have the experience now to know that the atrocious teacher conference shouldn’t have worried me so much, my daughter eventually got in the habit of washing her hands, and my son’s bad habit of kissing girls in first grade is now a treasured family memory. I’ve also come to realize that my daughter was onto something when she decided to mark herself and my son as royalty.