Book Review for "Fight for You" 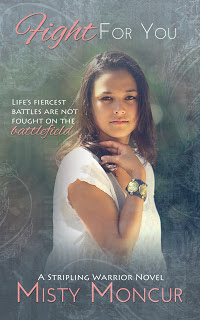 Misty Moncur's first book, Daughter of Helaman, was a Whitney Award finalist in the historical fiction category. Fight for You is its sequel. The books are LDS fiction, based on the Stripling Warriors in the Book of Mormon. They tell the story of Keturah, who joins the army of Helaman. She is the only woman in the army, which presents her with many challenges, not the least of which is her tangled love life. Here's the summary.

In Fight for You, Keturah is in Judea building fortifications. The work is hard, and the other soldiers don’t think she can pull her weight. Her brothers are becoming strangers, and Zeke’s jealousy is getting worse—because Keturah is falling in love with the wrong warrior.

But she’s not about to let cruel pranks and hurt feelings keep her from doing what she knows to be right. Keturah will do whatever it takes to protect her religion, her freedom, her peace, and her family. But in a camp of two thousand boys, the most important thing she has to protect is her heart.

I really liked Keturah. She's spunky and independent. She fights to get into the all-male army, but once she's there, she doesn't leave behind her feminine side. I like that she plays the role of healer, that she likes to cook for the men, and that she practices the traditionally female arts. I also like that she's learned methods to fight men stronger than she is.

Her best friend growing up, Zeke, is also the man her family intends for her to marry. She feels a bond to him, but she has also learned to love another man, Gideon, who taught her to fight. Gideon has his own issues, though. He plans on being a career soldier, which won't leave much room for a wife. I loved these two strong characters and the tension between them. The romance is not resolved in this book--another sequel is in the works--but the ending definitely gives the reader an idea of where things are headed.

Though many of the details are fictional, the book gave me a chance to think more deeply about events in the Book of Mormon. I liked imagining the details of some of the battles, the layout of the cities, and how the soldiers might have interacted with each other. The author's knowledge of Native American culture and tradition also made the book more interesting to me.


Misty Moncur wanted to be Indiana Jones when she grew up. Instead, she became an author and has her adventures at home. In her jammies. With her imagination. And pens that she keeps running dry.
Misty lives in a marsh near a very salty lake in Utah with her husband and children, where they cuddle up in the evenings and read their Kindles. Well, she does anyway.