Persuasion is Off the Press 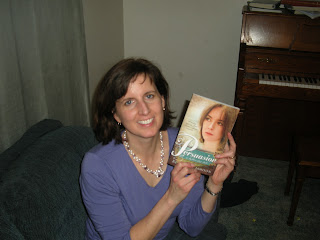 My book got off the press last week.  It looks great, and I was so surprised that it has a bumpy title--okay, the technical term is debossed, but you know what I mean.  It's also got that fancy shiny stuff on it.  Anyone know the technical term for that?  Glaze?

I'm excited and nervous.  It's weird to think of myself as an author even though I've been writing for years.  Until last year, when I submitted my novel and signed a contract, writing was just what I did for fun.  And writing Persuasion: A Latter-day Tale was a lot of fun.

One of the weird things about being a novelist is that people assume that I am my main character.  I've had conversations with people who called my main character "you" instead of by her name, "Anne."  There are a few reasons why this could be a problem.

First, my main character has a lot of problems with her parents.  I don't.

Second, my main character is still in love with a man she dumped years ago.  I'm not.

Other than that, I'll admit that I do have a lot in common with my main character.  I can be a bit of a doormat for one thing.  I've also been known to show up at garage sales without any make-up on.  Anne and I also have the same hair.  And we share an obsession with old movies and classic novels.