I was so happy to return to Cape Verde last summer. It had been 23 years since I served a mission there, and much has changed. Most people now have running water, electricity, and glass windows. The economy is doing much better. The hotels even have air conditioning and wifi! It was great to introduce my family to this wonderful place and get to know many of the happy people I met so many years ago. The hospitality industry there is thriving.

It was not easy to make travel plans to go back to Cape Verde, as it's not a frequent destinations for Americans. Therefore, I wanted to share a few of my experiences, hoping it will help readers who plan to visit Cape Verde.

We used three different airlines while traveling to and from the islands. First, we traveled by Royal Air Maroc to get across the Atlantic to Casablanca and then to Praia. Next we traveled by TACV Cape Verde airlines, and finally TAP Air Portugal.

I wish that I had looked at reviews for the airlines before I had booked tickets because I had quite a few problems with Royal Air Maroc. The biggest problem was that they kept rescheduling our flights--two times to be exact. And these were not the normal types of reschedulings. They moved our flights up first by one day and then by two days. In the end, we made it work, but it required me to be on the phone for about seven hours during the week before our flights. We also ended up having three red-eye flights in a row. Royal Air Maroc made up for this somewhat by putting us up in a hotel in Casablanca, which was nice. Though we were happy to visit Casablanca, it was more stressful than I anticipated to figure out everything in Morocco. Also, when we arrived in Praia, I did not have my luggage. I did get it three days later when the next flight came in, but this was very inconvenient. For us the inconvenience was probably worth it because we saved a couple thousand dollars for our group of seven people. For others, it might be better to just book with Air Portugal and save yourself the stress. The flights themselves were fine. The Trans-Atlantic flight, especially, was quite luxurious.

We had no trouble with the other airlines. Keep in mind that weight restrictions on luggage will be different than they are in the U.S., and also read the small print on Air Portugal's luggage fees. We ended up paying about $100 per suitcase for our return flight, which I wasn't expecting. (We each had a small carry-on suitcase and a small backpack.)

We were able to find many of the things we needed at shops around the cities in Cape Verde. I even found a bottle of sunscreen, which got lost with my luggage, but I would recommend bringing your own supply of sunscreen as it is difficult to find outside Praia. The stick kind is the best since it doesn't count as a liquid. I was glad that I brought a wide range of medications. We ended up using quite a bit of Pepto Bismol and activated charcoal for mild stomach problems. I also was not able to find a swimsuit when mine was lost. All the swimsuits seemed to be very small and imported from China.

In general, we found that most taxi drivers, hotel workers, and shop owners in Praia spoke English. In Fogo, people were much less likely to speak English. I needed to use my rusty Portuguese skills a lot in Fogo.

We had a taxi driver give us a short tour on our last day in Praia, and it was one of my favorite experiences while we were there. He told us about the Old City and many of the other sites I'd never visited before. 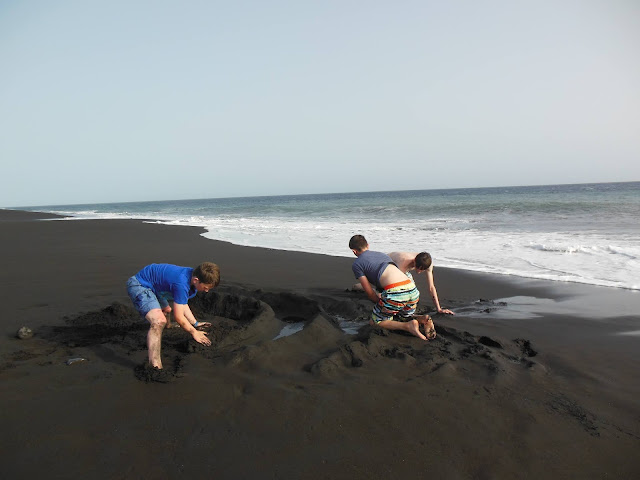 We felt very safe most of the time we were in Cape Verde. Some Cape Verdean Americans had warned us that Praia can be violent for tourists, but we were careful to stay in well populated places after dark, so we never had a problem. We kept only small amounts of cash with us since it was easy to get money from ATMs, and we never felt that anyone was trying to cheat us.
Drunk driving isn't as much of a worry for Cape Verdeans as it is for Americans. We had a scary experience with the driver we hired to take us to and from the volcano in Fogo. While we were hiking, he waited for us at the bar, and was therefore, not as safe a driver on the way home. If I were to do this again, I would probably talk with the hotel manager, since he had arranged the tour, and make sure the driver knew we didn't want him drinking before driving us home.
Our hotel manager was quite accommodating with all our needs. Our rooms had small safes that were easy to use, the pool had a lifeguard, and the manager let us know that they could get us a doctor if we needed one. They also helped us arrange tours and transportation wherever we wanted.

The locals can let you know when it is safe to swim. There were a lot more beaches that were safe for swimming in Praia than there were in Fogo. This did not keep my kids from enjoying the beach. They still made sand castles and played in the surf a little bit.

We enjoyed all the food we ate at restaurants. Everything was delicious and expertly prepared. Restaurants that aren't associated with hotels were especially affordable and still just as safe. 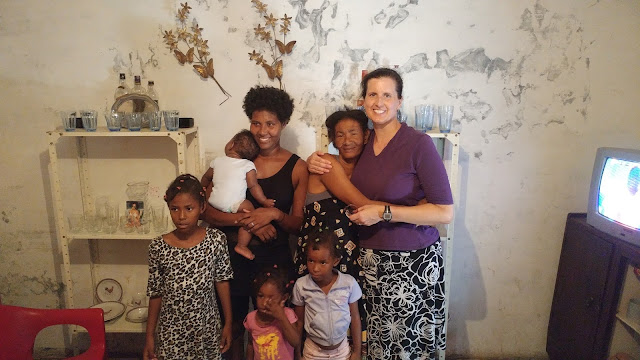 At first, I had a difficult time finding anyone I had known because I was asking for them by name. It became much easier when I started showing people old pictures. I recommend that if you're trying to find old friends, you upload some pictures on your phone, or you can bring a stack of pictures like I did. People love to pass them around and receive them as gifts.

If you happen to travel to Cape Verde and have advice, please post it in the comments. Thank you!