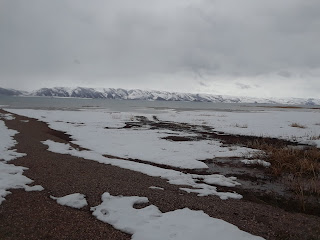 A couple of months ago, I went to my first writing retreat. It was at Bear Lake in Utah, which is nicknamed the Caribbean of the Rockies. Doesn't it look like the Caribbean (wink-wink)? I had a great time chatting with other writers and revising my latest novel inside my friend's warm house. I got so much done that I was ahead of schedule. On my last day there, I got a text from my husband that my youngest son, Levi, had been in an accident, and that they were taking him to the hospital to get him checked out.

If you know my husband Eric, you know that he usually tones everything down, so I was surprised that he had sent me a message without at least telling me that it was a minor accident or that Levi would be okay. I called the house and talked to my older son, who knew nothing. We started packing to head home. Then I called again and talked to another son, who had been at the scene of the accident. He said Levi had been on a bike, but he couldn't answer any of my questions without crying. That was when I realized this accident might have been more serious than I thought.

Within a few minutes, my husband called and said that Levi was stable, and they were heading to Primary Children's Hospital. As we drove home, he sent messages every half hour or so to let us know what the doctors said. It seemed that Levi was going to be fine. There was no damage to his internal organs and only one small broken bone. He just had a lot of scrapes and a rock that had dug itself into his knee.

It was only after I got to the hospital that I saw how serious the accident had really been and realized what a miracle it was that Levi survived. He had been at a crosswalk with his dad and brother. They were all on bikes and wearing helmets. The light changed, and the signal said they could cross. A car was stopped, waiting to turn right. My husband thought that the driver had seen them, so he told Levi to cross. Unfortunately, the driver did not see them. As Levi started across, she made her turn and ran over him. Then because she hadn't noticed that she'd hit him, she dragged him under her car for about thirty feet. 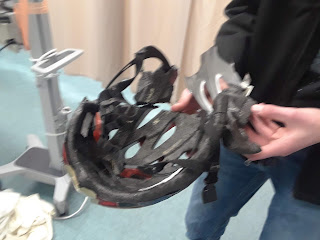 That morning, Levi had his dad check his helmet twice to make sure it fit him correctly. How blessed we were that he did that! The helmet fell apart as you can see in the picture, but his head remained almost unharmed, except for a few scrapes and some bad swelling on his ear. I won't include the pictures of his poor little ear because it will gross you out, but I am happy to say that his ear is much better now. 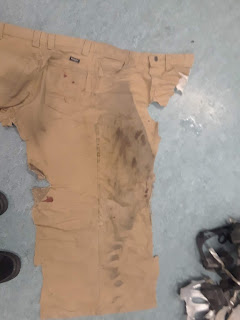 The picture above shows the pair of pants he was wearing. The paramedics cut them off of him. The curved black mark on the bottom is where the tire ran over him, and the gray streak toward the top shows where he was dragged. These pants got caught on his bike, which was stuck under the car. They kept him from getting run over by the other tire. There is one hole on his knee where he got a bad road rash. He is still recovering from that and from a sore on his foot. I had bought the pants a few weeks before and had only gotten this thick pair of Wranglers because they were the only pants available in his uniform colors. If I had gotten pants made from thinner fabric, I'm not sure they would have protected him as well. 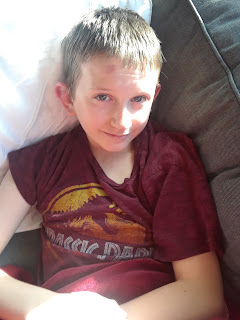 This is Levi a few days after his accident. He has had a lot of pain from his road rash, but he tells me that he isn't angry at the lady that ran him over. "Everybody makes mistakes," he says. He wanted to make sure she would know that he is okay. (I learned that the insurance company would take care of that for me since I did not know how to contact her.)

My husband and other son are still traumatized by watching Levi get run over, yet at the same time, they are so grateful and awed that he survived. We know it is a miracle, and that many children in similar situations have lost their lives or sustained more serious injuries. Eric says Levi could not have planned it better if he had been a stunt man. We are sure that our Heavenly Father was watching out for him that day. 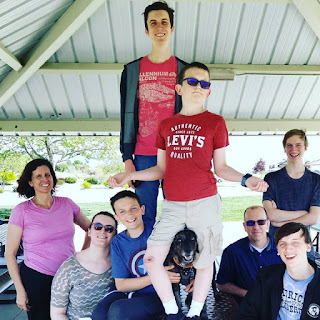 Now that it is almost two months later, Levi is walking pretty normally. His knee and foot still bother him, but he also enjoys the opportunity to brag about surviving his accident. In the above picture, he is proudly displaying the scar on his knee, as well as his invisible fish. I hope he always remembers how blessed he has been. The rest of us surely will.
Email Post