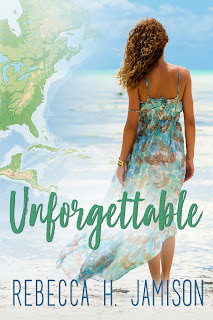 I'm happy to announce that Unforgettable is now available. I've included the first chapter below:

Fogo Island was on fire. Her home, her entire world, would soon be entombed in molten rock. Smoke billowed out from the volcano’s cone, and red lava exploded upward in jets, crashing back down to the earth in flaming balls. Peering past the old mango tree, she saw lava flowing down the hill toward the houses and shops that dotted her island village. Flames already engulfed the sports stadium, and hot, black ooze had swallowed some of their neighbors’ homes.

To the news crews, their little cinderblock houses might have appeared poor and inadequate. No one in the village had running water, and only a few had electricity, but their homes had always been enough for them.

Celia placed a hand on her mother’s shoulder. “We have to leave the house.” Government officials had ordered them to evacuate a few days earlier. She was supposed to be at a neighboring village right now. It’s where she had been yesterday and this morning. After dragging their two foam mattresses, the card table, and their two folding chairs to the evacuation site, she had dragged her mother there as well. But this morning, when she awoke, her mother’s mattress lay empty.

Panicking, Celia had run for an hour, taking paths known only by villagers, to where she suspected her mother would be, back at their house. Sure enough, Mama was here, trying to water the old mango tree with an empty bucket. Celia gulped air filled with the stench of rotten eggs and pulled on Mama’s arm, but Mama pushed her away. Though Celia was full grown at eighteen, Mama was still taller and stronger, and now out-of-her-mind crazy.

Celia would have to reason with her, and there wasn’t much time. “Mama,” she cried, choking from the taste of sulfur in her throat. “Do you want us to burn alive?” Powerless to stop the surge of living rock, she listened to the lava crackle and hiss as it rolled toward them. Though it only advanced a few meters per hour, it had already reached the edge of their property. Within minutes, it would set fire to the beautiful trees they had nurtured since her childhood.

Their village lay within the ancient crater far below the volcano’s newer cone. She had seen reporters observing the damage from the rim of the crater a few days before, but today, with all the smoke in the air, she couldn’t see as far as the rim.

Her mother stared at her with empty eyes, as if she spoke and walked in her sleep. “We can’t leave the crops,” she said, sounding so calm, “It’s good, black soil here.”

Just two weeks before, when the earth first started trembling, her mother had been perfectly normal, preparing a new batch of crocheted doilies to sell to the tourists who came to hike the volcano. She’d always handled tragedy well. Even when Celia’s baby sister died eight years earlier, she had stayed strong. Then, yesterday morning, standing along the rim and watching the sports stadium burn, she’d snapped. She started talking about Celia’s father as if he were still living with them, as if he hadn’t left, never to return. Celia had taken her to the doctor, who told them Mama needed to get away to a more peaceful place. That was easy to say; harder to do. It meant they needed money.

Celia pulled harder on her mother’s arm. “Mama, this is worse than the other eruptions. Half the village is already lost. We won’t be able to save the mango trees.”

Her mother twisted free. “These trees need water. They haven’t had water in over a week!” She picked up a broken branch from the ground and held it threateningly over her head.

Celia backed away. She wished Manny were here to help. He would throw her mother over his shoulder and haul her over the hill to safety. “You may want to die for these trees, Mama,” she yelled, “but I’m not going to stay here and wait for the lava to swallow me whole.”

Celia turned and marched twenty steps in the other direction, hoping Mama would follow, but her trick hadn’t worked. Instead of following, Mama held tight to the mango tree.

This was the woman who had sung her lullabies and taught her to sew. This was the woman who worked on the road crew to provide her with food and clothing. This was the mother who never, ever sent her to school with a wrinkly dress or a dirty face. Now Mama hugged her favorite tree, her face smashed against the trunk, sobbing. Whether this mental illness was temporary or permanent, Celia would not abandon her own mother.

Barely five meters up the hill from the mango tree, lava crept forward. A scraggly bush burst into flames. Celia wiped the sweat from her face. It was getting hotter, maybe too hot for a person to survive.

Behind her, something squealed. She turned to see a little black pig, hobbling toward her. Someone had tied a rope around its neck and weighed it down with a cinderblock. Probably it belonged to one of the evacuees, who had tied it up to keep it from danger. So much for that plan. “Where did you come from, poor thing?” Celia asked the pig, kneeling down to untie the rope from its neck. “Mama, we need to take this pig down to the city and find its owner.”

Her mother didn’t respond. She just kept hugging the tree, as if it were an actual person, more important than her own daughter.

Once she finished untying the knot, Celia flapped her hands. “Shoo, pig.”

The pig, unlike her mother, was wise enough to obey. It ran down the slope of the hill, farther and farther from the approaching lava.

Frustration welled up inside Celia. “Mama!” she yelled. “Come with me! I promised Manny I’d be here when he finishes college. I don’t want to die.” She walked back uphill and grabbed hold of her mother’s arm again, but Mama had such a tight grip on the tree that Celia couldn’t budge her.

“You can’t trust a man to come back for you,” her mother howled through her sobs. “Not after he leaves Fogo Island. That’s when you’ve lost your spell over him. He forgets how beautiful you are.”

Celia knelt down and took her mother’s face in her hands. “We have a lot to live for, Mama. We can build another house down lower in the city.”

Time was running out. As the lava gained on them, a grape vine on the other side of the tree caught fire, and Celia grew desperate. If she hit her mother over the head with a tree branch, knocking her out, she could drag her away before the lava reached them. It might be the only way to save her life. But she couldn’t do that. She couldn’t hit her mama.

The lava rolled ever closer—just a few steps away now. So close that the heat burned Celia’s skin. How could Mama not feel that?

“I’m sorry, Mama,” she said in her softest voice. “I’m sorry about the volcano.” Then seeing the far-off look in Mama’s eye, she had one more idea. Her hands shook as she pointed in the direction of the closest hill. “I think you’ve watered this tree enough. We have more trees to water on the other side of the hill. They’re all gonna die if we don’t water them. We’ve got to hurry!”

Her mother stared at her for a moment. Then, like a bird answering a distant cry from her flock, Mama raced out of their burning orchard, carrying her bucket with her. Celia followed. She didn’t look back to watch the lava roll through the front door of the only home she had ever known.

Copies are available at Amazon.com.