Tribute to My Dad 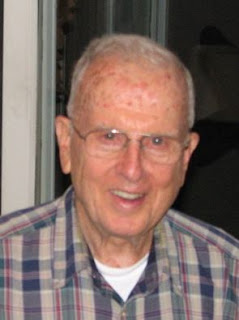 My father passed away this past July 5, and I've wanted to honor him with a blog post for a while now. I flew home just in time to be with him, my mom, and my brothers right before he died. It was a peaceful time, in a way, because the last few years have been so difficult, due to Dad's dementia. We felt that he had moved on to a better place in the spirit world, where he could be with his parents and other loved ones.
I was able to be home for three and a half weeks, the longest I've been home since before I got married. It was wonderful to spend more time with my mom and other family members.
I want to share with you a little of Dad's biography that I shared at his funeral. (I'll omit details about my brothers and sister for privacy sake.)
Herk had a happy childhood in Bethesda, MD. They lived near a dairy farm, and Dad would play ball in the field where the cows grazed. He could hit the ball and throw father than the other kids, so the neighborhood kids began to call him “Hercules,” Herk for short.
Dad loved to build things. By age 7 or 8, he was building tree forts galore in the woods behind his home. He appreciated good wood, and knew how to identify the different types of trees. One of his major forms of exercise throughout his life was cutting down dead trees and chopping up wood for the fireplace. At Christmastime, when he was growing up, he made decorative Yule logs to sell. He took orders for them at the local hardware store.

Dad was always concerned about others. He grew up near the Baptist Home for Children, which was an orphanage. I think he realized that he was blessed to come from a good home and to be physically fit. This was also the time of the Great Depression, and he could see that some of his school friends suffered financially. He would sometimes go with his mom to take a basket of food to a family of one of his classmates. He felt protective of his siblings and the other kids at school. 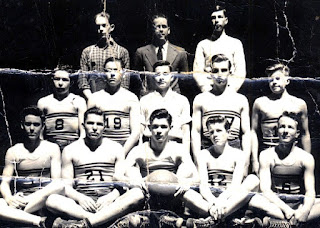 When he was 16, he was thinking he might like to be a doctor. Then on Dec. 7, 1941, he was listening to a football game on the radio. He could hear the announcer calling people over the PA system: “Would Admiral So and So report to the front office” or something like that. He noticed that all the head military people and government officials were getting called away from the game. Dad was a worrier, so naturally, he was concerned and curious. Later, he found out that the Japanese had attacked Pearl Harbor.

Though he was only 16, he went right out and joined the army. So when he graduated from high school, he was in the Army Reserve. He went to American University, where he played on the basketball team while he was in the Army Reserve. Dad joked that he was high scorer on the team for the year, but it was only because all the other men were off at war.

His father suggested that he should try to get into one of the military academies. Dad took the tests, hoping to get into West Point because he got sea sick and didn’t want to go on ships. Well, he got accepted into the Naval Academy, where they placed him in the engineering program. He was in the top half of his class. Because it was war time, they pushed him through in three years instead of four. 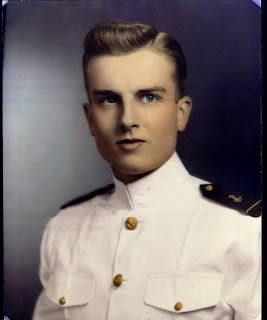 He graduated in 1947, which was also the year he married his first wife. They moved first to Newport News, VA, where their first son was later born. Dad went out to sea in destroyers for a few weeks at a time during those year.

Then they moved to Charleston, S.C., where their second child was born. Dad attended UCLA for graduate school while they lived in Monterrey California and then in San Diego. After that, he went to sea in amphibious assault ships for two years. In San Diego, they lived in a Quonset Hut. My aunt came to stay with them for the summer and said it was her favorite summer vacation, living with them and traveling to see the sights of California.

In 1958, his career took a turn, and he felt like he was really contributing as a Project Officer evaluating sonars, torpedoes, and Anti-Submarine Warfare tactics in Key West, Florida. Later, he worked for two years in Washington D.C., where he was able to effect improvements on entire classes of ships for the Navy.

By this time, He had four sons and wanted to spend more time with his family, so he quit the Navy and took a job with General Electric in Syracuse, New York. He divorced his wife in about 1965. Dad loved his boys and was very sad about the divorce and how it affected them.

He took a job working for the Civil Service as a Senior Executive Director of Sonar Programs. He bought a home in Virginia because he felt Virginia had the best colleges for his songs. He also liked the fact that his yard had a creek and some woods around it. His two oldest boys lived with him at this time. Later the younger two spent summers with him.

Dad was a great teacher, and he once volunteered to teach inner city kids. He also taught a management class to help people at the Navy to be better managers. One of the things he taught was called “The Latimer Law of Reciprocity.” It was that if you want to know how someone feels about you, you should first ask yourself how you feel about them. If you like them, chances are that they will like you also. 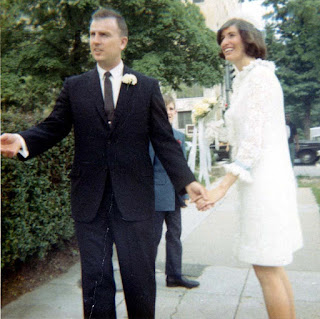 He met my mother in 1966. She was his secretary at the Navy, and he broke the unwritten rule that you shouldn’t date your coworkers, especially not when you’re the boss. His life began to brighten up at this point. They later married.

I was born in Virginia a few years after they married. My brother was born a couple years after that. When he was only a week old, they discovered that my brother had a life-threatening kidney problem. As usual, Dad dove head first into solving the problem, getting the best medical attention and taking detailed notes about how to help Henry get better. It took about a year of surgeries and hospitalizations before he was better.

After that, my brother and I had an ideal childhood, playing in the creek, hanging out at the pool, and running wild with the neighbor kids. Dad often had me tag along as he went up and down the street collecting donations for the Kidney Foundation. He had a great rapport with all the neighbors around us. He was always concerned about others. 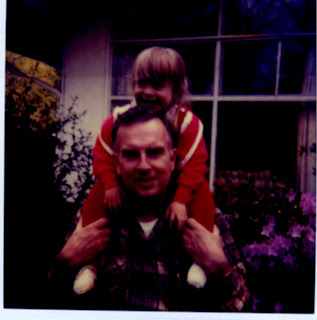 He also took me along on his errands when I was little, and he liked to brag to everyone about his sons.  He told me once that all of his children turned out very differently, but they all had one thing in common—they all genuinely cared about other people. That made him really proud.

After my sister was born, and they found out that she had Down Syndrome, Dad told Mom that it would be okay, and that God gave her to us for a reason. Dad didn’t usually speak religiously like that, but he definitely felt that his life had a purpose, and especially so with regard to Caroline.

He was laser focused on improving Caroline’s life, including her health and her behavior. At this time, mom volunteered to be the PTA secretary at Caroline’s school, but she didn’t really like going to the meetings. Dad said he would go to one of the meetings in her place. When he got there, and started listening, he said, “What we need is money.” The moms on the PTA just sort of looked at him and said, “yeah, good luck with that.” So Dad put together a presentation and called around to some organizations like the Lions Club to speak with them. Pretty soon, he had thousands of dollars in donations coming in to help these kids. He also started selling cookbooks, wrapping paper, and jam to raise money. He was very pleased when the school was able to buy walkers so that some of the kids who had always been in wheelchairs could walk up and down the halls on their own. All this money also helped the teachers to go to conferences where they learned about facilitated communications. A few of the students learned to “talk” for the first time through computer technology. While Dad was president of the PTA, the school built a new handicapped accessible playground.

Later Dad was on every kind of committee and board you can imagine on behalf of special education, vocational programs, and therapeutic recreation for the disabled. 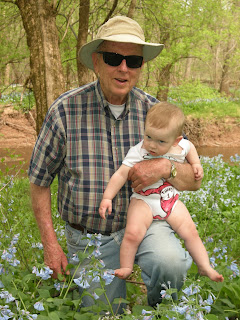 During the last few years, Dad’s been on the receiving end of service. I think he would want me to publicly thank my two brothers who helped my mom so much. Henry has arranged a lot of services to help Mom while Randy has visited Dad multiple times every day.

Most of all, I want to thank my mother for all she’s done. She’s had to be more of a maternal figure for Dad, and she’s been an amazing support for him through many difficult and grueling hours.


Life goes on. Death is not the end. Dad’s life continues, and he’s still doing good works. He is near us, watching over us.
Email Post
Labels: my family