Two hundred years ago, Michaelmas was a bigger deal in England than Christmas. 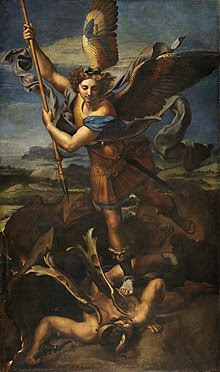 There's a passage in Jane Austen's Persuasion, in which Anne mentions Michaelmas. She's staying with her sister Mary at the time and has just left her childhood home of Kellynch because her father has leased it to Captain Wentworth's brother:

So passed the first three weeks. Michaelmas came; and now Anne's heart must be in Kellynch again. A beloved home made over to others; all the precious rooms and furniture, groves, and prospects, beginning to own other eyes and other limbs! She could not think of much else on the 29th of September; and she had this sympathetic touch in the evening, from Mary, who, on having occasion to note down the day of the month, exclaimed, "Dear me! is not this the day the Crofts were to come to Kellynch? I am glad I did not think of it before. How low it makes me!"

The English celebrated Michaelmas on September 29. Like Labor Day in the United States, it marked the transition from summer to autumn. It was also a day for personal transitions, as happened in Persuasion--the Crofts moved to Kellynch. Michaelmas was a good day to lease a new home, hire servants, pay a debt, or to perform any other important duty. Even the poorest families celebrated by eating goose.

Michaelmas was held in honor of Saint Michael. Thanks perhaps to John Milton, who wrote Paradise Lost in 1667, Saint Michael was a hero to the English people during Austen's time. In Milton's work as well as in the New Testament, Michael is the archangel who leads the celestial army against Lucifer. Many English churches are named in Saint Michael's honor.

In Persuasion, the idea of Michaelmas brings additional symbolic meaning. It marks the autumn of Anne's life as a time of transition, perhaps a time to change old ideas and reject former advice. It also hints that Anne, like St. Michael, must conquer her own demons.